I know, it's Monday and I'm posting the Saturday wrap up. What can I say. I'm running behind and I'm working very hard to catch up. I'm getting there! ;) Only 2 days late!!

Well folks, on Friday, I left with my darling daughter to spend the night at her place getting prepared for the drive to Uxbridge from Mississauga. We were heading out to attend the Highlands of Durham Games! We left around 9 am Saturday morning, picked up a friend on the way and we were off. Such a beautiful drive in the country along the byways of the Canadian shield. Fibro made sure to remind me that it was coming along for the ride when it decided to make my stomach super queasy to the point where my poor daughter had to pull over as fast as she could or ... well you know what happens with a queasy stomach... About a km further down the road was a gas station and we stopped in hoping they carried some brand of anti nausea pills and/or diet ginger ale. The only ones they had were from Gravol, a new herbal version of anti nausea pills and boy do they work!!! I was amazed! Within a few minutes of chewing down 2 gummy-type tablets, my stomach settled completely, as if I'd never been nauseous. Suffice it to say that from now on, I'm keeping these ginger-based anti nausea pills on hand since even a short ride on the city bus can render me into a miserable lump of humanity.

We made good time and got to the games at 11. We were waiting in line to park and we could hear all the pipe bands practising for the Grand Opening with the massed bands. What a treat! Yes, I love love love bag pipe music! So there! :) 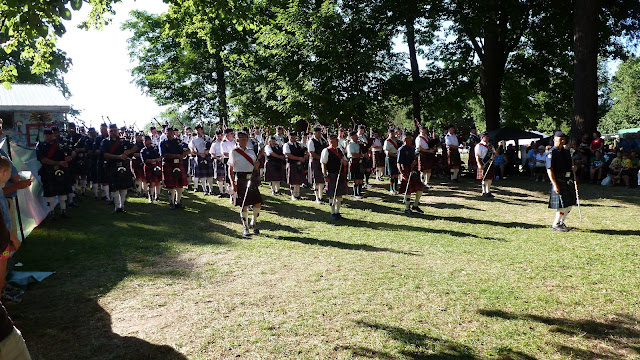 Four bands led by a grand master entertained the crowds throughout the day in various parts of the park. Everywhere you turned, there were bag pipers and drummers performing various songs. Sometimes they all played at the same time so you got bag pipe music from four different directions which could be somewhat confusing but still fun to hear.

There were tons of booths displaying all kinds of goods, from handmade soaps to jewelry, blankets, etc... There was also one booth that carries all sorts of armor, swords, claymores, daggers, katanas and sais, medieval helmets and shields, chainmail, and so much more! Equipment for both the serious player and for fun.

The armourer, Blades4You, that supplies Karen and Adrian's medieval equipment was there as well. He is a pleasure to deal with, is brutally honest with you when asked about the quality and value of specific equipment. Will recommend pieces over others. He has a huge selection of equipment on hand and can pick up other pieces as specified.

We love dropping in on him anywhere he sets up. He always has something new on display and his booth is always always full!
Click on the photos for larger versions! 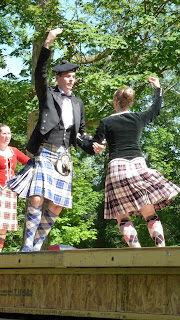 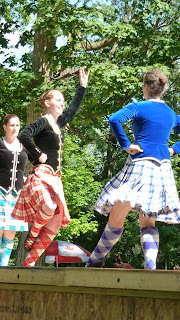 We also watched dancing competitions. One gentleman who was dancing competitively told me he's been at it since he was 3. I believe it! His jumps were amazingly high and his steps were precise.

It was quite the show considering that they were dancing in very hot sunshine in velvet and wool costumes. Some of the dancers looked like they were ready to pass out and once they came off the stage, they would be opening their coat and downing bottles of water while the sweat poured down. You have to give them points for dedication.

There were not very many animals at the games. There were several dog breeders, one of which specialised in blue merle collies with whom Karen made instant friends.

And of course, where there are horses, you will find Karen petting one. She has had a love affair with horses since she was knee high to a grass hopper. Never showed any fear towards them and I've never seen a horse shy away from her. On the contrary, they become instant friends like this Clydesdale.

We came across this whimsical bench in the park where the games were being held. Looks can be deceiving because it was surprisingly comfortable to sit on! 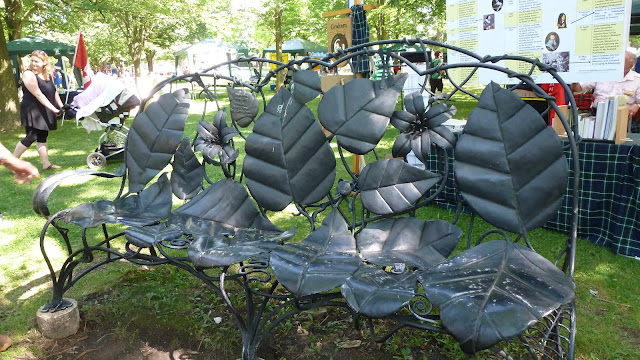 It is so cute! I love the hummingbird, dragonfly and the kitty hiding behind the leaves. 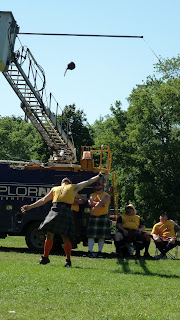 Some of my friends made me promise to take photos of the burly men in kilts that can always be found at highland games. Well, here they are! 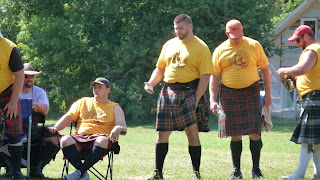 And to be honest, my daughter took these shots using my shoulder as a tripod as we were quite far away from the competition.

And finally the sun began to set and the final entertainment was on for the day.

Before the band Poor Angus came on stage, we were entertained by this young man who played the fiddle beautifully. No sheet music and several pieces later, he had the crowds clapping and cheering. So much so he had to come back on stage for an encore! Quite the ability for a 9 year old. 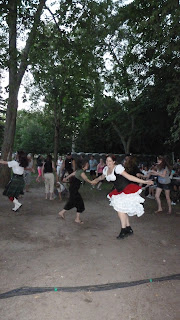 And then Poor Angus came on stage. I'd never heard them play before but now that I have, wow! They are very very entertaining and I would recommend seeing them to anyone who loves this type of music.

They got the crowds dancing and laughing. My daughter and her friend went out there and had a good time as you can see.

They'll be in Trenton, Ontario next and after that they'll be coming to Hamilton for September! I hope I can go see the show then.

And finally, a few more photos of the massed bands while they performed Amazing Grace. It was breathtaking and beautiful to hear and feel. The bagpipes all beginning to play at the very same moment just goes right through your body and makes your heart skip a beat.

I may be contacted at lokipancrochetdesigns@gmail.com with any requests, questions, estimates.

See all my Designs!

My Ravelry Pattern Shop (click image to go to my store) 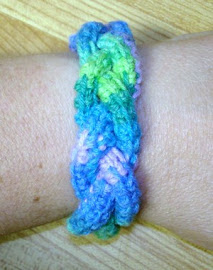 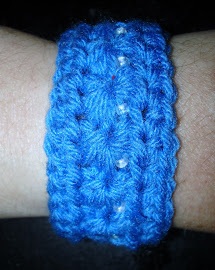 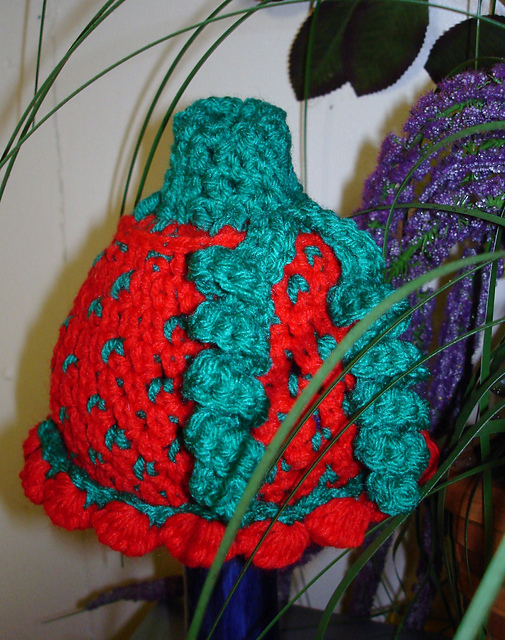 MarieAnge
I crochet and knit as much as I can, with breaks for cooking, untangling my Bengal cat from my yarn, checking in on my grownup kids and spending time with my appreciative loving husband. 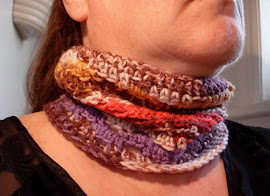 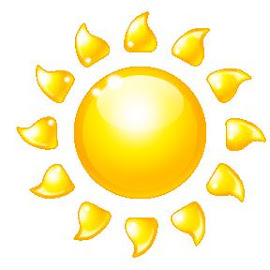